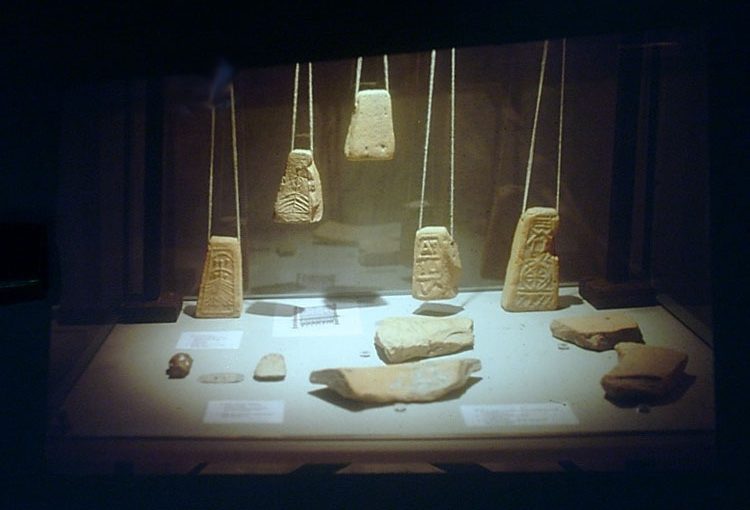 The field of archaeological textiles is a difficult specialty since most of the material deteriorates rapidly. Because they are so ephemeral, it is a rare occasion when prehistoric textiles are recovered. However, we do have many of the tools used for making textiles that include spindle whorls, loom weights, combs, and other objects associated with the craft. This page catalogues textile tools that I have seen in museums ranging from early Neolithic spindle whorls to Viking and Medieval assemblages.

Please note that many of these photos are taken from outside glass cases and I am unable to provide measurements and weights. However, I will do my best to provide as much information about the context as possible. If you need further information, please check the museum’s website. Many now include online catalogues of their collections. It is also worthwhile to contact the museum directly with any questions you may have.

Some resources for those of you who are interested in historical and ancient textiles include the European Textile Forum whose mission is “…to give academics and craftspeople working with historical textile techniques a place and opportunity to meet with each other. This is the perfect surrounding and the perfect place to solve technical questions regarding your textile and to get input from others working on similar pieces – both on the academic and on the craft side.”

At the end of the page there is a brief list of books and articles about ancient textiles.

Please click on the thumbnails below to see the larger images.

The museum in Piacenza is a beautiful museum housed in the castle. When I visited the Etruscan section was being renovated, and I hope to return when that is opened. The prehistoric galleries are arranged chronologically and then by region and excavation. It is interesting to note both the similarities and the differences in whorls to those found farther east in Reggio Emilia, Modena, and Bologna. The star shaped whorls are less common, but there are more flat, discoid whorls.

Fratta Polesine is the site of Frattesina, one of the earliest sites where glass was made in Europe. The excavations there revealed that it was a center for all kinds of craft activity, in addition to its famous glass there were ceramics, metalworking in bronze, lead, and gold, amber carving, ivory work, even ostrich eggs. Frattesina was a focus for trade around the world.

The exhibits cover the period from the Middle Bronze Age (14th-13th Century BC) to the Late Bronze Age/Initial Iron Age (11th-9th Century BC) in the region around Rovigo that includes Fratta Polesina, Gavello, Villamazana, and other sites.

The museum is in an out of the way place, but is worth the trip. The exhibits are modern displays that are well laid out with explanations in Italian and English. The textile tools here are made from a variety of materials including ceramic, antler, bone and ivory. The loom weights also come in a wide range of sizes.

The ceramic spindle whorls are rather plain and conical in contrast to whorls made in other media.

There are a number of finely carved sticks that are found with textile tools, although there is no explanation for them. They are also found in burials.

I took some photos of textile tools while on a trip to the Museum of Archaeology in Bologna in 2017. The cases were nicely organised by context. That is, rather than group all the spindle whorls together in one case and all the beads together in another case, the objects were grouped according to where they were found. For example, if they were found in a burial, all the grave goods were displayed together. All the beads, spindle whorls, and other objects were on the same shelf with a card explaining the context and how the objects relate to each other. I have undone this a bit because the focus here is on textile tools. However, I will provide as much information as possible so that you will be able to do further research if you wish.

Representations of the Textile Industry

This object, a Tintinnabulo, described as a ritual pendent was part of a lavish burial in Tomb 5 of dell’Arsenale Militare (700-675 BC, Villanovan III). It depicts the steps in wool processing. The drawings show the engravings that are on the front and reverse of the tintinnabulo. More about the tintinnabulo and the burial can be found here.

Modena is located in north-central Italy in the middle of the Po River Valley. The region is close to sea-level and bordered by the Alps to the north and the Apennines to the south. The Bronze Age settlements of the Terramare (Earth-sea) people were built up from the marshy lands and houses were built on stilts. The excavations of the region have yielded hundreds of spindle whorls and some beautiful bronze drop spindles. There is a recreation of a Terramara village, the Terramare in Montale, just to the south of Modena. I’ve also written about a day I spent there and included some photos of the reproductions of the textile tools.

Unlike museums in the US and UK, Italian museums tend to put everything on exhibit. Some unique ojects will be displayed on their own, but often trays of a hundred spindle whorls will be packed together in a display. While that makes it difficult to see individual whorls, it does give an idea of how many there were in use during a given period.

The star-shaped whorls seem to be unique to this area and period. It might be a local tradition or even the work of an individual or family who produced these. I have made reproductions of them and they have a fascinating animated effect. At rest they look like stars, or at least something that has individual lobes or points. However, when spinning they appear to turn into circular whorls with concentric bands.

I am fascinated by the bronze drop spindles found here and in Reggio Emilia. They are cast hollow and are something I would like to try making myself some day. I’ve included different views to give an idea of the decoration.

Reggio Emilia is a small city to the northwest of Modena, along the Via Emilia heading towards Milan. Like Modena the exhibits are chronological and just about everything is on display. It’s interesting to note the similarities and differences between the textile tools given how close Bologna, Modena, and Reggio Emilia are.

Museum Website (in Italian, the English version doesn’t appear to be working)

When I visited the museum in 2016 the Prehistoric wing was in the process of being remodelled and there were only a few textile tools on exhibit.

This is a small museum, but with great treasures. It’s definitely worth a visit if you’re in North Cyprus. There are only a few textile tools. The Middle Bronze Age I spindle whorls date from 1850-1800 BC. The bottom two photos are of loom weights, spindle whorls, and stone grinders that date to the Late Bronze Age, 1600 BC.

The museum is housed in a ruined monastery and is another small museum filled with treasures.

Iskele’s museum is new, opened in 2018, and hosts beautiful displays of objects from the Early Neolithic through the Roman period. Objects are displayed in groups in front of murals depicting scenes appropriate to the period. The spindle whorls below date from the Neolithic (8800 – 3800 BC) and are made of stone and bone.

The Ashmolean has a large collection of material from Cyprus, including these steatite (soapstone) spindle whorls from Nicosia.

I visited Oslo in 2017 and had a tour of the Historical Museum. The objects are sorted by type rather than chronologically, so visitors unfamiliar with different materials will need to check the guidebooks. These tools are from around the 9th century AD.

The textiles and tools come from the Oseberg boat burial. The boat was built in AD 820 and was in use until AD 834 when it was used for the burial of two women. The burial includes two chests that contained textiles woven from linen and wool, tapestries, and textile tools including a swift, distaffs, weaving tablets, shears, and looms. Raw materials, such as bundles of unspun flax were also a part of the goods interred with the women.

Unlike Italian museums, the ones in the UK display only their finest examples with much of the collection in storage. The museums here are arranged by city, roughly from north to south. Many of the museums in the UK have catalogues on their websites that include dimensions and weights for all the objects.

Since I last visited Arbeia part of the vicus (the civilian village connected to the fort) was excavated. I expect that they now have many more textile tools. Like other Roman forts, Segedunum would have had a village, called a vicus, close by. This would be the place were craftspeople would be making the things that the army couldn’t supply for itself, including cloth and cord.

The newly remodeled Hancock Museum has beautiful displays of textile tools that go from the prehistoric up to the medieval.

Bede’s World is an open-air museum where you can walk around and into typical buildings from the Anglo Saxon period (5th to the 11th century AD). It is based around the Monastery of St Peter and the Venerable Bede. The monks there would have been likely to spin cloth and weave textiles.

Formerly in the Old Fulling Mill above the river, the museum is now housed in the buildings next to the cathedral.

This is a difficult museum to visit. Devizes can only be reached by bus or car, but it is definitely worth the effort. The small museum houses great collections that are often overshadowed by all the material they display from Stonehenge and the gold from the various Bronze Age barrow burials.

The Museum of Somerset, Taunton

The Meare Lake Villages near Taunton were a major craft manufacturing site during the Iron Age in Britain (800 BC – AD 100). The site had evidence of metalworking, glassworking, wood, antler, and bone carving, pottery, and more. There was evidence of textile manufacture and of the manufacture of textile tools. More bone combs were found there than in the rest of Britain combined. It would be interesting to find if anyone has done a study to see if other bone combs in Britain and neighbouring regions can be traced back to Meare or Somerset. The combs are distinctive and carved from whalebone, indicating that in addition to manufacturing tools, there must have been a brisk trade in raw materials.

Another brief plug here. I make reproductions of some of these ancient spindle whorls in ceramic, pewter, and bronze. They are available at my Etsy shop.

For more information about textiles in archaeology and history, I can recommend the books below. Click on the title for a direct link.

Fanfani, Giovanni, Mary Harlow, Marie Louise Nosch (Editors) Spinning Fates and the Song of the Loom: The Use of Textiles, Clothing and Cloth Production as Metaphor, Symbol and Narrative Device in Greek and Latin Literature

A brief selection of articles and other resources: